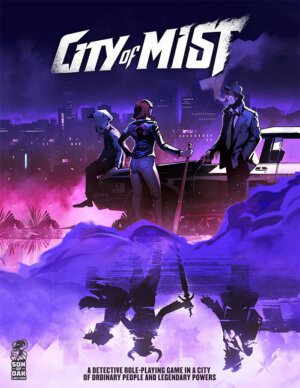 A roleplaying game which looks really interesting arrived on the scene last month from a company I’m not familiar with, Son of Oak Game Studio. Just because I hadn’t heard of the company certainly doesn’t mean City of Mist doesn’t look mighty impressive. Built upon the popular Apocalypse World Engine, City of Mist seems to be perfect for those looking to roleplay their own versions of Bill Willingham’s Fables comic or the TV series Once Upon a Time as the game focuses on mythical characters living right here among us. The core book is huge and so far there’s been quite a lot of supplemental material released already. You can snag the 512 page core rules in PDF for $24.99 and even check out a seventy page sneak peek absolutely free.

Hit the rainy streets of an enigmatic metropolis as a modern-day legend in search for the truth. Investigate unsolved cases, uncover the stories of the city residents, and confront the hidden forces pulling the strings from beyond the veil of the Mist. Make hard calls about which aspect of your life to promote and which to neglect; then suffer the consequences. And when it all falls apart, stop holding back and become the unstoppable incarnation of your Mythos…

The City of Mist Core Book contains everything you need to create and run City of Mist stories: rules for creating your own characters and crew, a comprehensive explanation of the roll+tags system, the Mythos & Logos character development rules, and a complete guide for the MC (aka Game Master) including tips on how to orchestrate the drama as well as guidelines and examples for creating cases, characters, locations, and story arcs.

The rulebook design is a homage to super-powered noir graphic novels with six comic strips, full-spread chapter covers, and staggering character and location art back to back.

WHAT’S IN THE BOOK?