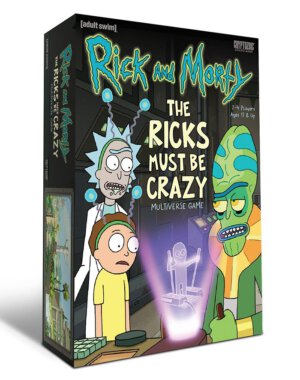 Cryptozoic Entertainment have announced three more games based on the immensely popular Adult Swim series Rick and Morty. There’s no word yet on official release dates or MSRP on the titles but The Ricks Must Be Crazy, The Pickle Rick Game, and The Rickshank Rickdemption will be previewed at the New York Toy Fair later this week.

Rick and Morty: The Ricks Must Be Crazy Multiverse Game: In this engine-building game, 2-4 players take on the roles of Rick, Morty, Zeep, and Kyle as they introduce Power-making technology to different worlds, and then try to get that Power before their opponents. Based on the Rick and Morty episode “The Ricks Must Be Crazy,” gameplay takes place in four “’Verses” with unique attributes: the Rickverse, Microverse, Miniverse, and Teenyverse. Players spend Actions to build Power Supplies and Contraptions and move to different `Verses. At the end of each round, Power generates from the bottom ’Verse up, and players utilize it to play One-Shot abilities, use Character Abilities, and power-up their Contraptions. Q2 release.

Rick and Morty: The Pickle Rick Game: This intense 1-2 player game is based on the hugely popular “Pickle Rick” episode of Adult Swim’s Rick and Morty. One player plays as Pickle Rick as he tries to escape a heavily armed compound, while the other player takes on the roles of both the Russians and Jaguar as they try to stop him. The Pickle Rick player uses weapons cards to dole out damage and Air Vents to get out of jams as he or she tries to get to the Rooftop. The game includes both Pickle Rick and Jaguar miniatures that are moved across a dynamic board made up of tiles that are constantly being added, rotated, 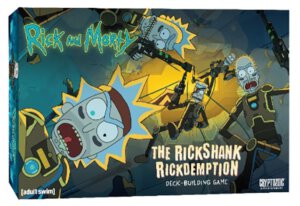 and flipped. Adding to the off-the-wall fun is the game’s packaging: It looks like a pickle!

Rick and Morty: The Rickshank Rickdemption Deck-Building Game: This 2-4 player sequel to Rick and Morty: Close Rick-Counters of the Rick Kind Deck-Building Game features a set of Council cards that cause players to vote to enact new rules, dramatic one-time effects, and other mysterious situations. Access Tokens give players votes and chances to devalue the Galactic Federation currency from 1 to 0. The game exudes off-the-wall Rick and Morty art and gameplay, even including a Szechuan Sauce card.