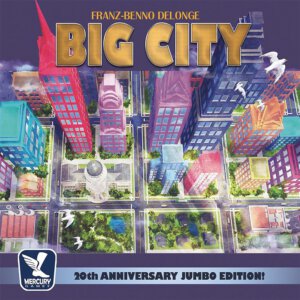 Mercury Games will be releasing an all new edition of one of the first city building board games ever designed. The Big City: 20th Anniversary Jumbo Edition will not only contain larger buildings than previous editions but also completely revamped game play for modern players. The game is for two to four players, ages 13+, plays in around 60 minutes, and will carry an MSRP of $150.00 when it arrives in December.

In Big City, players acquire cards in eight different neighborhoods, then use them to lay out buildings either one, two, or three spaces large. The points they receive for a given building is a base score, plus bonuses for the buildings surrounding it. Someone must play city hall (scoring no points for themselves) in order for anyone to start placing any structure beyond the simple residences and business.

This edition also includes some differences from the original, including the Redevelopment Phase, escalating City Hall points, an early game end, a new Waterfront Tile, and tightened play for 2–4 players.