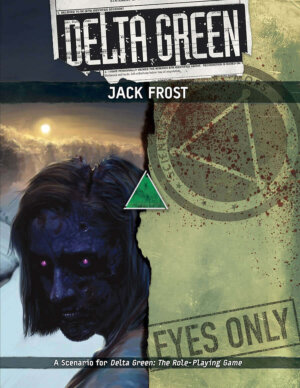 Arc Dream Publishing has released the Delta Green adventure Jack Frost in print and PDF. Travel back to the 1990s as the agents investigate a mysterious and deadly Alabama cold snap. The 92 page softcover is available at DriveThruRPG for $29.99 or grab the PDF for $9.99.

A rural Alabama valley has always been prone to severe cold snaps. On 22 DEC 1998, the worst “Jack Frost” storm in history hit the farming town of Willis. A lingering freeze and sudden flood killed dozens.

Your players get a ground view of that apocalyptic storm. Their scientists, drawn from an ultra-classified UFO research project, suspect that something otherworldly is at work. Their investigation may reveal a threat more vast and terrifying than they could conceive.

Jack Frost is a scenario for Delta Green: The Role-Playing Game. It features the other side of one of Delta Green’s deadliest conflicts: the researchers and soldiers of the legendary MAJESTIC program.

» PROJECT PLUTO: Experts from the top-secret labs at Area 51.

» NRO DELTA: The lethal “men in black” who keep America’s secrets from America itself.

Deep research and dozens of handouts bring this sprawling operation to life. Get digital versions of all handouts and the scenario as a bonus when you buy Jack Frost in print.

So bundle up. Mull your cider and wine. Put a few more logs on the fire and pull your family close. Pretend you can’t hear the sounds outside. Tell yourself they’re only the wind.

They have to be just the wind.

Looks like Jack Frost is coming to town again.