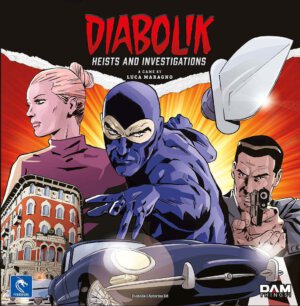 The well received Diabolik: Heists and Investigations is going to arrive in the U.S. from DAM! Things and Pendragon Game Studio by way of Ares Games. The tense cat and mouse hidden movement chase pitting cops against master criminals aiming to complete two of three heists. The game is for two to four players, ages 10+, plays in around 90 minutes, and will carry an MSRP of $49.90 when it arrives in September.

In Diabolik: Heists and Investigations, players will experience in first person the “impossible thefts” that are told every month in the comic books, both from the side of Diabolik and Eva Kant, and from Inspector Ginko and the police.

The mechanics are that of hidden movement, but with the exception that when discovered, the criminals will be forced to flee on the main board, visible to all cops. Thanks to the cards, every turn offers different situations.

The Criminals will have to complete two heists out of the three available to win the game and to do so they will have to move hidden in the shadows, leaving traces of their path that the Police will have to find to ruin the plans of the Criminals.

The Police will have the hard job of investigating the traces of Diabolik and Eva, but they are not alone, in fact they will have the opportunity to call four total Police Officers to help, to keep every corner of the city under observation. To win the game, the cops will have to raise the Danger Level to the maximum on the Danger Track. Usually, solving a Clue increases the Danger Level by 1 point, but that’s not the only way to do it. On the other hand, if Eva or DIabolik complete a Heist, the Danger Luevel is lowered.

In their turn, each player can perform a maximum of 3 individual actions. The only exception is for drawing, discarding or playing cards, which is a repeatable action. 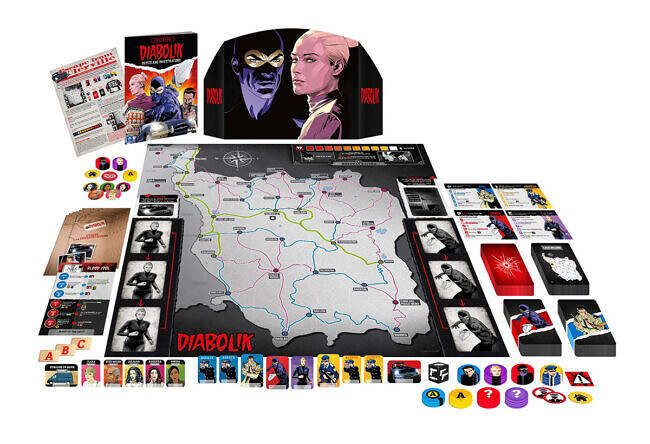