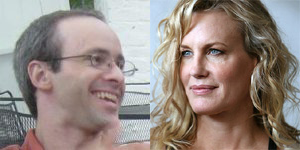 From our friends at North Star Games:

Bethesda, MD – At the recent Chicago’s Toy and Game Festival (Chitag), North Star Games founder Dominic Crapuchettes was named Rising Star Inventor of the Year by the Toy and Game Inventor (TAGI) Awards.  And it was no easy task winning this prestigious award, as Dominic was up against Daryl Hannah (yes, that Daryl Hannah) and the guys who won $1 million dollars with the best Super Bowl ad last year, Joe and Dave Herbert.

“This was a big shock and a huge honor,” stated Dominic, designer of Wits & Wagers and Say Anything. “Beating out two celebrity finalists speaks to the quality of our games, as my win was clearly not due to my A-List status, or B, C , and D list for that matter!” said Crapuchettes.

The public and toy industry professionals vote on the TAGI awards.  That makes Dominic’s win so impressive, since he did not have the celebrity status nor big publicity tours the other finalists had.

“Despite winning this special award,” Dominic opined, “it is still great to have a celebrity like Daryl Hannah bringing more attention to board gaming.”

All of Dominic’s games have won numerous awards, and his Wits & Wagers is the most award winning party game in history.  Say Anything has won 17 and Wits & Wagers Family, just released this year, has 16 and will likely rack up a few more.

In addition to all the game awards, North Star Games has had some other impressive feats for a company still run out of a basement: