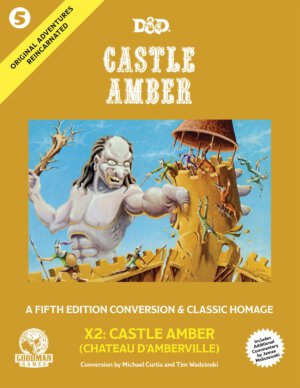 Goodman Games will be releasing the latest Dungeons & Dragons Original Adventures Reincarnated this Fall. The fifth in the series will feature the Tom Moldvay classic, Castle Amber. You can preorder the hardcover right now for $49.99 with a planned release for this October.

They fled from the far-flung land of Averoigne: the Amber family, a bloodline of wizards and warriors persecuted for their dark sorcery and occult crimes. In their new world, they built a lavish manor for themselves, the fabulous Castle Amber. For a time, the Ambers flourished, their magical and military might having little equal. Then, however, jealousy and murder struck the heart of the family and the Curse of Stephen Amber descended upon the castle like a fell and heavy hand. Now, the Ambers dwell beyond space and time, imprisoned with their monstrously transformed servants and suffering under the family’s dead patriarch’s death-sent doom.

It is into this mad manor that the party awakens, plucked from their home world and imprisoned in the heart of Castle Amber. To escape, the heroes must negotiate a path through the insane Amber family home, overcoming the clan’s machinations, dangerous servants, cunning traps, and bizarre phenomena. Only by finding a way to break the Curse of Stephen Amber will the party be able to return home. Failure means a lifetime of imprisonment in Castle Amber, a place where lifetimes can be very short indeed…

This adventure is an homage to the original module X2: Castle Amber, written by beloved game designer Tom Moldvay in 1981 and partially inspired by the writings of acclaimed weird fiction author Clark Ashton Smith. Herein you will find high-quality scans of the original first edition adventure module, plus commentary by renowned contemporary game designers and writers. A full fifth edition conversion of the original adventure is included, as well as brand new additional adventure encounters and an expanded Castle Amber. This is the perfect old-school “funhouse dungeon” given new life for the fifth edition era. Won’t you please come in?