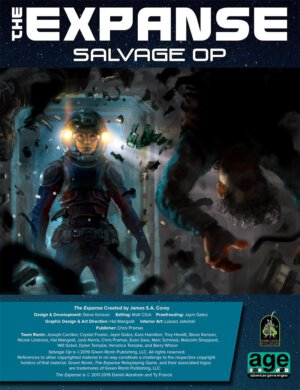 Space is terrifying. It is vast, it is cold, and it is dark. In space, so the saying goes, no one can hear you scream.

In other words, it’s the perfect setting for a fright.

Salvage Op is an eerie adventure set within the universe of The Expanse, designed for third-level characters, in which the exploration of a derelict vessel threatens to go horribly awry. In the interest of preserving the experience for players, this will be a spoiler-free review.

From the GM’s perspective, Salvage Op is well-laid out and easy to follow. Its modular design makes it a great one-off introduction to roleplaying in the world of The Expanse while its suggestions for scaling the difficulty up or down allow for greater control over the difficulty curve. The necessity of higher-level characters also makes it an appealing option for a diversion in the middle of a larger campaign. There’s even a perfect chance to add in a new player character or for the current crew to get a serious upgrade to their ship — if not both.

The quasi-dungeon crawl nature of the scenario also makes Salvage Op a great taster for those who may be used to more strictly combat and loot-oriented styles of gaming. For those with D&D or Pathfinder-oriented gaming companions, the scenario offers an attractive middle ground.

That being said, Salvage Op does require a GM committed to building atmosphere to truly shine. The good folks at Green Ronin have done everything imaginable to build a fun experience that’s ready to roll right out of the box, but really selling it will come down to the GM. Pitched as a “haunted house in space,” anyone interested in running the scenario may want to brush up with some good old fashioned horror-adjacent sci fi, like Alien or Sunshine, to really nail the flavor. Pacing will also be important here, as well as a keen ability to moderate tension. While the “never split the party” rule should always be followed, should players split up to explore, it provides ample opportunity for serious fright.

The Expanse, as both a setting and a system, is fantastic for the variety of storytelling it’s built to support. To that end, it’s not surprising that scenarios aren’t one size fits all. Salvage Op won’t fit nearly as well into your game of political intrigue or corporate espionage; however, that doesn’t mean it can’t be done. For stories focusing on those out in the Belt, though, this is a fun and exciting fit and offers players the opportunity to make big, game-changing decisions.

True to form, Salvage Op benefits from a clear layout, including callboxes for relevant stats, bolded calls for checks, and easy-to-delineate sections. A tri-color palette keeps the PDF easy to read – even on screens – and give the whole product a finished feel. As with the core book, beautiful full-color illustrations help to convey a sense of place and atmosphere, serving as both reference and inspiration.

For an experienced GM – or a newbie looking to branch out and hone their skills – and a group of adventurous players, Salvage Op is a treat. While a bigger lift on the GM than some may expect from a scenario, the rewards for both players and characters are great.

TGG REVIEW
9 TGG SCORE
0 VISITORS' SCORE (0 votes)
Summary
For an experienced GM - or a newbie looking to branch out and hone their skills - and a group of adventurous players, Salvage Op is a treat. While a bigger lift on the GM than some may expect from a scenario, the rewards for both players and characters are great.
REVIEW SCORE
What people say... Leave your rating
Sort by: