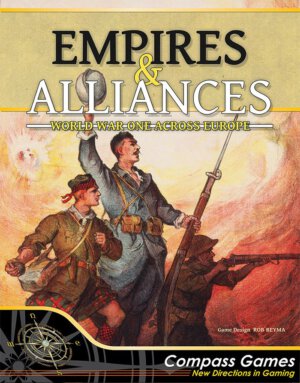 Compass Games is about to release an update to a classic Avalon Hill title with Empires and Alliances. Create by the original designer of AH’s Guns of August, E&A brings the strategic challenges faced by The Allies and Central Powers in WWI Europe to your table top. Empires and Alliances will begin shipping on February 22nd. The title is a mid-level complexity wargame for two to four players (with solitaire rules as well) and is available from Compass for $75.00.

Empires and Alliances is a new and improved game based on Avalon Hill Guns of August also designed by Rob Beyma.

Empires and Alliances is a strategic level simulation of the First World War. Players command the Central Powers and Allied forces that fought in Europe from 1914 to 1918. The map runs from the French Atlantic ports to Moscow and Rostov in the east. The map includes St. Petersburg in the north and Italy, Greece, and the portion of the Ottoman Empire that encompasses modern day Turkey in the south. There are off board Boxes for the Caucasus and the Middle East. Terrain types include forests, swamps, mountains, rivers (along hexsides), lakes, and major and minor cities.

The basic unit is the corps with a few divisions. Most of the minor countries have divisions and the major powers also have a few division breakdowns. There are infantry, cavalry, and army level artillery units. Tanks, air, and Stosstruppen begin to arrive in 1917. Units 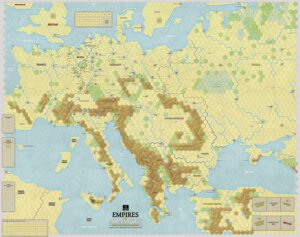 have historical corps and division IDs. Britain has their professional army at the start and receives Territorial and Kitchener reinforcements in 1915-1916. The British Commonwealth has distinctive Australian, New Zealand, Indian, and Canadian units. The French also have their Colonial and Territorial units.

There is a 1914 scenario which is played on all fronts. The Germans have to contend with a Russian advance as well as concentrating on the French. There is a nine turn 1918 scenario where the Germans need to try to win quickly before American reinforcements overwhelm them. This scenario introduces Tanks, Stosstruppen, and air units. Then there is the four year Campaign Game. Barring a quick victory in 1914, both players settle in for a war of attrition to exhaust their opponent. Britain can blockade the Central Powers and Germany can initiate Submarine Warfare against Britain. Countries entering the war, or war weariness results, can provide strategic opportunities for one player and major challenges for the other. There are Sudden Death Victory Conditions that can end the game at the end of 1916 if either player is doing exceptionally well.