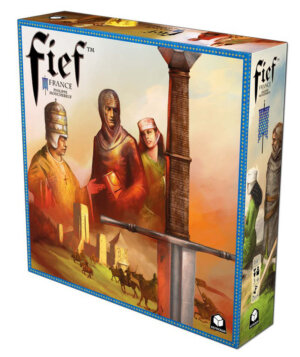 Asyncron Games and Ares Games are teaming to bring you a new edition of the feudal board game Fief France. In the game players lead noble families, in 15th century France, as they compete to to wield the most power in the nation. Fief France is for three to six players, ages 14+, plays in around one to three hours, and will carry an MSRP of around $70.00 when it arrives later this year.

Fief France is a game of dynastic ambition in which players assume the roles of French nobles during the Middle Ages and they strive to become a ruling force in the kingdom. In turn, they acquire Royal and Ecclesiastical titles which give their families in uence to elect the next Pope and King. strengthening their positions by negotiating marriage alliances!

In FIEF France, a player may attempt to gain control of all the villages in a Fief to gain the Royal Title of Baron, Earl, or Duke, and he may take part in the election for the next King, possibly becoming King himself, thus bringing more power to the family!

To win the game, a player may need to form alliances with other players through diplomacy and marriage to obtain his goal. But when there’s a marriage, the two families become allied and they now win the game together and cannot win alone, unless the marriage is annulled by the Pope or the spouse dies ”mysteriously.”

Things can suddenly change as event cards can introduce good harvests, plagues, or famine. Players will also need to protect their land and castles by hiring men at arms and knights. These are then used in defense or to invade other territories, fighting fierce battles!

This revised edition of FIEF France includes a new and larger game board, and the rulebook has been revised and updated.