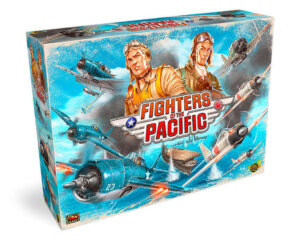 A new WWII Pacific Theater wargame is up for crowdfunding for Capsicum Games and Don’t Panic Games. In Fighters of the Pacific, players will lead their air assets against one another as each looks to sink their opponents aircraft carriers. The game is for two players, ages 12+, and plays in around 60 minutes. You can reserve a copy of the base game for a $56.00 pledge through June 25th. Expected delivery is next February.

Fighters of the Pacific is a fast-paced and simple tactical warfare game of naval air battles during WWII in the Pacific.

You lead several squadrons of fighters, bombers and torpedo aircraft, one by one to dominate the skies and launch attacks on the enemy’s ships and islands.

You replay the most famous air battles in history with a simple but realistic mechanism, on a huge battlefield, with dozens of aircraft and ships.

Each plane is moved individually on hexagonal spaces. If it targets an enemy aircraft, that one must react and if it cannot, it takes damage. Some planes can use bombs or torpedoes to destroy ships or land targets.

Players should keep their groups of planes organized to maintain initiative.

Each type of aircraft has its own characteristics of speed, armor and special abilities.

No dice, no ruler, just hexagons, a few markers and a lot of aircraft. Fighters of the Pacific is designed to provide an intense feeling of frantic air battles.

Much attention has been paid to historical realism. Each aircraft carrier, aircraft and scenario are designed and drawn to be as close as possible to reality, to the delight of history buffs.

The base game contains a large modular board, player aids and all the tokens you will need to play. This includes 4 aircraft carriers: the USS Yorktown, the USS Hornet and the Japanese Kaga and Akagi, with an escort destroyer each as well as all of their aircraft squadrons in 1942, at the dawn of the Battle of Midway.

Fighters of the Pacific is scenario-driven. The base game comes with 6 different scenarios. With practice, you will be able to set up your own scenarios very quickly.

With expansions, you will be able to replay historic battles (the Battle of Midway and Battle of the Coral Sea), with new aircraft carriers and their full squadrons, new types of aircraft and many scenarios for each stage of these battles.