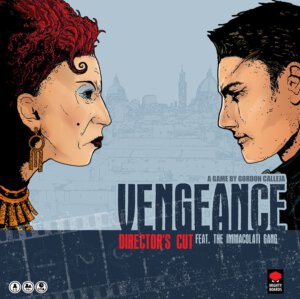 Mighty Boards is about to wrap up Kickstarter crowdfunding for an expansion to the action movie board game Vengeance. An all new criminal faction joins the fray in Vengeance: Director’s Cut. There’s even a fresh hero and custom moves added to the mix too. The expansion is over 200%% funded and ends November 15th. You can secure a copy for a $30.00 pledge or score the core game and expansion for a $120.00 pledge. Expected delivery is August of next year.

As you dodge, roll and reverse-blade your way into the room where the boss is hiding you lock eyes with Donna Immacolata, your life-long nemesis and…

-“CUTTTTTT!!! No, this won’t work. This scene needs to be more snappy. Swap that scrawny grunt for a tougher guy. The hero needs to earn his final show-down!”

The Director’s Cut Expansion adds a layer of direct player interaction as players alternate in taking the role of a vengeance movie director. Players can influence the action by playing Director cards during another player’s fight phase activating minions and bosses as well as triggering directorial changes that break the fourth wall such as changing extras in the scene or changing the scene altogether!

The Director’s Cut Expansion also includes the brutal Immacolati gang and a new hero, Napoleone. Napoleone is hell-bent on taking down Donna Immacolata, the leader of the Immacolati gang who framed his family for a smuggling operation into a rival gang’s territory and had them murdered brutally in a swimming pool outside the city.

In short, it’s one hell of a sequel!!