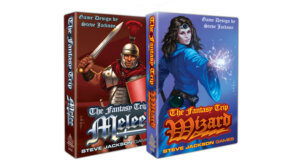 The return of the old school Steve Jackson Games RPG, The Fantasy Trip, is on the horizon and time is running out to back the project on Kickstarter. I have a softly nostalgic spot for Melee, Wizard, and TFT as I owned the originals (in the pocket boxes) and remember playing the tactical games with my best friend Elliott Miller back in high school. Granted, we played these more as battle games than as a roleplaying game though.

The project is over 1200% funded and you can pledge your support and receive the PDF at the $25.00 level, the physical Melle and Wizard for a $30.00 pledge or the Legacy boxed edition which will include the two boxed tactical games, the 160-page In The Labyrinth rulebook, and Tollenkar’s Lair with a color map and the PDFs for a $60.00 pledge through August 24th. Delivery is expected March 2019 with the PDF available this October.

Steve left Metagaming after completing his work on In the Labyrinth and the other titles that were planned as parts of a never-to-be-published TFT box set. After his time at Metagaming, Steve published The Space Gamer magazine and founded Steve Jackson Games.

The Fantasy Trip continued at Metagaming, under the guidance of line editor Guy McLimore (author of the excellent Grail Quest TFT solo adventure) and others. Several adventures were released . . . then Metagaming closed its doors, and The Fantasy Trip was unavailable for nearly 40 years.

Fast forward to 2017. Steve regained rights to his work! He’s now working on the Legacy Edition . . . what TFT should have been when it was first published 40 years ago.

The Fantasy Trip is an “old-school” RPG, with easy character design, realistic tactical combat, and an emphasis on story. It is unabashedly focused on dungeon crawls and arena battles. It’s a great introduction for your friends who are new to roleplaying, because it’s so easy to get started.