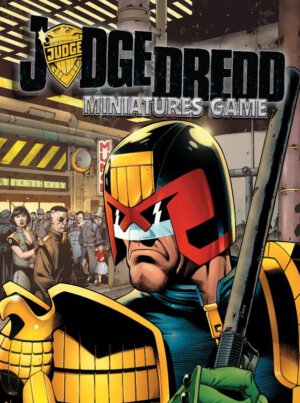 Thrill to the comic book adventures of Joe Dredd, the hardest and toughest judge on the streets of Mega-City One, to your table top in the Judge Dredd Miniatures Game.

Welcome to Mega-City One, a city of over four hundred million people and every one of them a potential criminal. Stretching the length of the 22nd Century North American eastern seaboard, Mega-City One is the most dangerous city on Earth – a serious crime takes place every second of every day. This is a city so dangerous that it demands a special breed of law enforcer. Here, there are no police, no trials and no juries – there are only the judges. It takes fifteen years to train a judge for life on the streets of Mega-City One. Fifteen years of iron discipline, rigid self-control and concentrated aggression. Their court is on the streets and their word is the Law.

In Mega-City One, unemployment has reached epidemic levels, reaching as high as 98% in some sectors. Critical housing shortages force the population to inhabit vast mile-high blocks that cram tens of thousands of citizens into their apartments. Life in Mega-City One is one of claustrophobia and extreme boredom – small wonder many citizens turn to crime as an escape to the monotony of their lives. In a city of four hundred million people, crime always provides a way to stand out from the crowd, however briefly.

For a limited time you can download a copy of the game’s rules absolutely free at the Wargame Vault!