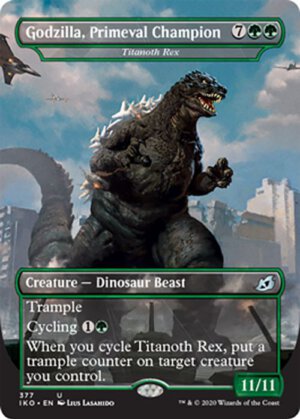 Godzilla and his fellow giant Toho kaiju are coming to Magic: The Gathering later this month from Wizards of the Coast. Ikoria: Lair of Behemoths arrives for the online Magic: The Gathering Arena to be followed by a variety of physical booster and collector booster options to incorporate the giant monsters into your tabletop game. There will be nineteen monsters in all, with three expressly available in Japan only. Keep in mind these are Godzilla themed cards of those already in the Commander 2020 set and not completely new card designs. These cards hit the digital edition of the game on April 14th. A physical release was set for April 24th but with the current pandemic that date could very well be up in the air.

Included in the collector boosters: