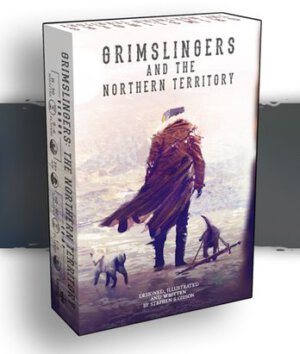 The first expansion to the weird west themed card game Grimslingers hit Kickstarter yesterday and has already passed 100% funding. Grimslingers: The Northern Territory, from Greenbrier Games, includes even more of what gamers already dig about the core game. This expansion includes new areas to explore, creatures to battle, gear to plunder, and more! You can reserve a copy of the expansion at the $29.00 pledge level and the project runs through April 6th.

Grimslingers: The Northern Territory is an expansion to the Grimslingers core game, which refines and redefines all aspects of the game, while adding more of what players love. Improved gameplay and strategic choices in player versus player, along with a plethora of new solo/co-op content for players to delve into for many hours.