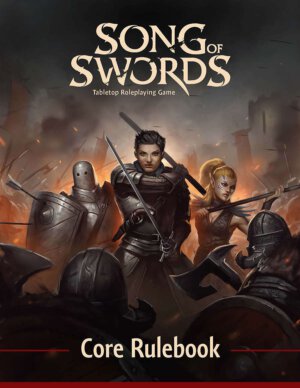 If you’re in the market for a combat intensive, grittier style of fantasy RPG you might want to give Song of Swords, from Opaque Industries, a look. The game allows for a variety of custom approaches from low to high fantasy in the Tattered Realm. The 246 page corebook is available in PDF for $19.99 from DriveThruRPG.

Song of Swords is a dark, low-fantasy tabletop roleplaying game that focuses on lethal, tactical combat, with a library of arms and armor inspired by real history.

In combat and through roleplay, your character’s choices and preparedness have immediate impact and severe consequences in Song of Swords. The game uses a dice pool system that only requires d10s. With a detailed wounds system, and the freedom to decide exactly where and how you attack, combat is a thrilling, and often deadly dance.

Inspired by themes and cultures of real-world history, Song of Swords takes place on the continent of Vosca, within the Tattered Realms. It is a rich setting filled with familiar fantasy elements, but below the surface, a dark and sinister world awaits.

The game caters to all players, no matter your campaign or character: play soldiers or gritty mercenaries in historical campaigns, or shrewd sorcerers and cunning elves in high- or low-fantasy campaigns!

Characters that act according to their core nature, pursuing their goals, are rewarded for their efforts and are able to advance their martial proficiency, abilities, and skills. This makes advancement a more rewarding experience than grinding through hordes of enemies.