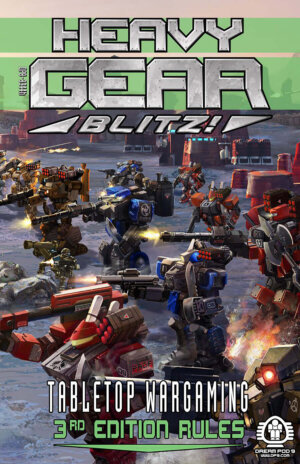 The latest edition of the mech combat miniatures game Heavy Gear Blitz is available in both print and PDF. The book, from Dream Pod 9, contains everything you need for fast moving hard hitting miniatures battles. The 162 page softcover is available at DriveThruRPG for $29.99 while the PDF of the rules is currently absolutely free.

A tabletop miniatures wargame with over 20 years of heritage and success.

The colony world of Terra Nova continues to be in a state of constant conflict. Massive polar nations, invaders from Earth and even armed gangs have turned its arid landscape into a never-ending battlefield. Old grudges and fragile alliances set the stage for complete chaos while the Northern, Southern, Peace River and NuCoal Factions fight countless wars in the name of power, profit, revenge or mere survival.

Having failed to conquer Terra Nova once before, Earth has added her subjugated colony worlds to a new Colonial Expedition Force (CEF) invasion force of GRELS, FLAILs, and Hovertanks. Ships blacken the sky, unleashing unending waves of would-be conquerors onto Terra Nova’s war-torn surface. Even Utopia’s newest technological marvels of war have joined the CEF to claim a piece of the planet. Will the factions of Terra Nova unite as they did in the first invasion? Will that be enough this time? Or will Earth grind another planet under her iron heel?

The War for Terra Nova has only just begun… Gear Up and join the battle!

With the Heavy Gear Blitz 3rd Edition Rules you can: