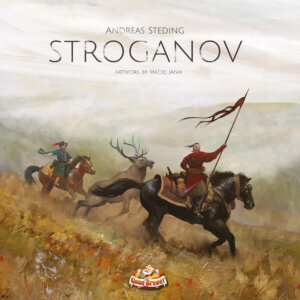 Currently up for crowdfunding for Game Brewer is the historical game Strogonov. In the game, designed by Andreas Steding, players will explore Siberia and expand Russia’s empire using their bands of roving Cossacks. Stroganov is for one to four players, ages 12+, and plays in 60 to 90 minutes. The Kickstarter project is past 200% of its funding goal and you can reserve a copy of the game and unlocked stretch goals for a $72.00 pledge through March 12th. Expected delivery is this October.

In the 16th century, Russia began to expand eastwards to develop the vast expanses of Siberia. This phase in history is closely associated with the name “Stroganov”.

In the game Stroganov, players try to collect the best furs to gain wealth and fame as they move across the vastness that is Siberia. They will journey through Siberia in spring, summer, and autumn before returning home each winter. After four years (rounds), the player who has best utilized their actions and collected the most victory points wins.

Each year, the players must move eastward across the landscape. They can spend horses if they wish to travel further. Once they have advanced, they may take a basic action, such as trading or collecting furs or coins. Lastly, they may take more advanced actions such as visiting a village, setting up a yurt, taking a Tsar’s wish (card), setting up a hunting lodge, or buying a landscape field. All of these actions — combined with exploring and some storytelling along the way — earn players victory points at the end of the game.

Every winter, players return home to Tyumen to prepare for a new year.

After four years, the game ends, then players score victory points based on having collected the right landscape tiles, fulfilled the Tsar’s wishes, built hunting lodges, collected furs, and more.