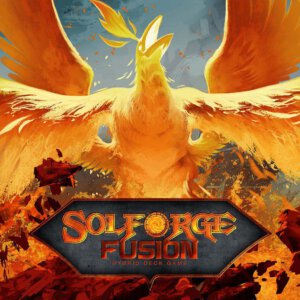 Stone Blade Entertainment has launched a Kickstarter to fund their hybrid card game SolForge Fusion. Designed by Richard Garfield and Justin Gary, the fantasy battle game promises over 15,000 unique cards at launch. The game is for two to four players, ages 12+ and plays in around 25 to 60 minutes. The project is over 600% funded and you can reserve a copy beginning at the starter tier for a $40.00 pledge through September 30th. Expected delivery is April of next year.

Stone Blade Entertainment has announced they are re-launching their hit digital trading card game, SolForge, as a new tabletop experience. SolForge Fusion, designed by Magic the Gathering creator Richard Garfield and Stone Blade CEO Justin Gary, will be the first-ever Hybrid Card Game, with over 15,000 cards in the base set alone.

In SolForge Fusion, players combine unique half-decks to create a full deck. Every half-deck is algorithmically generated, meaning no two decks are the same. Players can combine and recombine their half-decks to explore all the strategic possibilities SolForge Fusion has to offer.

SolForge Fusion will also support digital play through Tabletop Simulator, and each half-deck will be able to be scanned into Stone Blade’s online database so players can participate in tournaments online.

“SolForge Fusion is the culmination of a decade of work, combining great gameplay, great stories, and new technology to create something truly revolutionary,” said Justin Gary. “SolForge Fusion is one of the most exciting game projects that I’ve gotten to work on, and I’m really very pleased with the results,” added Richard Garfield.

In SolForge Fusion all decks are algorithmically generated so no two decks are alike. Then you take 2 decks and shuffle them together to battle!

You and your opponent compete in strategic lane based combat. When you play a card it levels up, allowing you to access new powers and abilities to defeat your opponent and damage their creatures. First player to bring their opponent down to zero health wins!