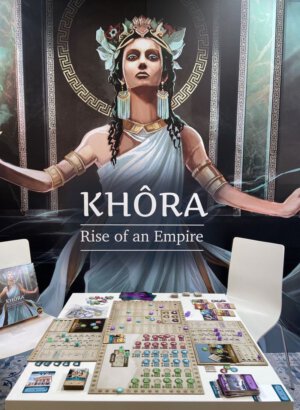 A new historical civilization building board game is on the horizon from Iello Games this Fall. In Khôra: Rise of an Empire, each player takes the helm of an ancient Greek city-state as they each aim to lead their civ to dominance. The game is for two to four players, ages 10+, plays in around 60 to 90 minutes, and will carry an MSRP of $54.99 when it arrives October 22nd.

In Khôra: Rise of an Empire, you are the ruler of a resplendent city in Ancient Greece. It’s up to you to develop it faster and better than your opponents. You can make many political choices in each round, and philosophy, legislation, culture, trade, and military will shape the future of your city. Optimize your dice rolls, collect taxes, send your army to colonize foreign lands, unlock achievements, and make sure your city will shine throughout all of Greece!

An intense and deep civilization game!