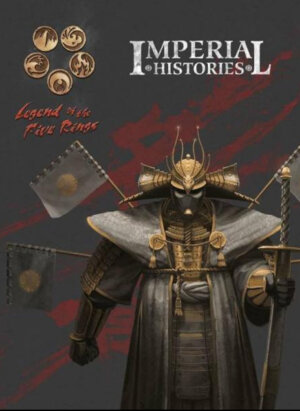 This week brings an all new supplement, from AEG, to the Legend of the Five Rings Role Playing Game and it’s entitled Imperial Histories! Ten eras of Rokugan’s history are explored and all new schools, spells, ancestors, and techniques bring more adventure and excitement to your gaming table!

The Imperial Histories recount the triumphs of the Emerald Empire and the most noble Emperors who have lead it in shining glory. Maintained by the dutiful Miya and the devoted Ikoma families, the Imperial Histories are a testament to the Emperor’s unfailing leadership and the never wavering loyalty of his servants. All samurai of the empire can look upon them and be assured of the imperial family’s unquestionable judgment and guidance of the Emerald Empire.

At least, the official imperial histories are such. The truth … much more interesting. The Imperial Histories pulls back the curtain on many tumultuous eras of the Emerald Empire. Revealing not only the glories of the Rokugani, but also their failings and tribulations. Providing a wealth of information for players and GMs alike, this tome serves as a resource for playing in various times of the Empire, or bringing elements of those times to your characters and campaigns.

-10 eras in great detail, including The Dawn of the Empire, The Gozoku Era, The Clan Wars, The Race for the Throne, and more

-All new schools, spells, ancestors, techniques, and more, some thought lost to the ages

-The 1000 Years of Darkness in great detail, offering you an opportunity to fully explore this apocalyptic alternate history