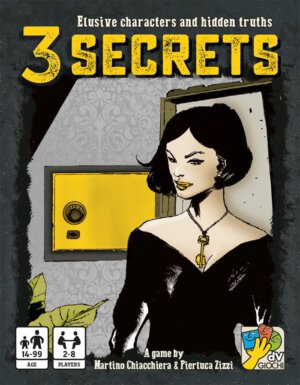 Playing Time: Around 15 minutes per case

MSRP: $12.95 (approximate based on European pricing)

3 Secrets is a cooperative deduction game soon making it’s way to North American shores; the game is currently available in Europe. In essence, two to eight players will work together to to learn what secrets the three visual clues on each game card represent. To do this one of the players will take on the role of an undercover agent while the other players are detectives trying to glean info from the agent by asking questions and making guesses. If the detectives can determine what the three secrets from the three highlighted card elements in a set amount of time, the criminal is apprehended. Hooray!

3 Secrets contains fifty oversized cards and a folded rules sheet comprising four pages. There’s also an app available for iOS or Android which is highly recommended to use with the game. The cards are of nice stock and the greyscale artwork, while not especially eye popping, is certainly serviceable. The rules are easy to understand and to the point.

Play begins by selecting a card from the deck which shows the criminal the detectives will attempt to arrest. Everyone gets an opportunity to look at the front of the card which displays the criminal’s name, an image of the character in the midst of doing something, and three color highlighted elements. Say a cash register or shoes or a painting on the wall. A seven color range for these elements represents the difficulty of guessing the secrets from the card, with green being the easiest and purple the hardest. Once everyone has had a good look at the front, one of the players is selected as the undercover agent.

Hopefully, you’ve downloaded the app by this point because a) it will make tracking the time left to guess a secret a whole lot easier, b) help the agent not have to mess around when they provide a clue, and c) actually give the detectives more time to guess a secret than if they don’t use the app. The agent will handle the app during play. The agent will begin by entering the criminal’s name into the app to prepare to hit play. Before doing this though the agent gets to look over the back of the card. The card back contains three clues, three secrets, and a story to be read about the criminal if the detectives catch the bad guy/gal.

As soon as all the players are good to go the agent will press the play button on the app (or begin a countdown with some other device) and it’s on to the action. The detectives will have five minutes to guess each secret for a total of around fifteen minutes of gameplay or, in other words, each “case” is broken into three five minute rounds; if you aren’t using the app you’ll only get ten minutes. It doesn’t matter what order the secrets are guessed and players can ask questions about any of the elements during the five minute round; they just have to guess one secret. 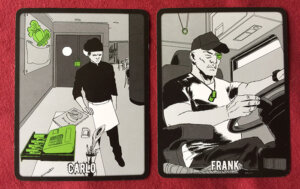 The detectives will ask the agent questions in order to narrow down exactly what secrets the elements on the card represent. The agent may only respond to a question in one of four ways: yes, no, not exactly, and it is irrelevant. Keep in mind the agent is working with the detectives so they should answer the questions as honestly as possible. How you go about asking questions is completely up to you; the detectives can all be throwing questions at the agent at once (don’t be surprised to see the agent player’s eyes glaze over before their head explodes) or take more genteel approach and circle around the table as each detective take a few seconds to formulate a question or takes a stab at guessing a secret.

At any time the agent may decide to reveal one clue about a particular unrevealed secret. This will help the detectives but it also cuts the remaining time available for the round in half. I have to point out this time keeping becomes pretty tricky if you aren’t using the app. The agent may not provide another clue of any kind for the remainder of the round.

Zero Stars: How in the world did these people become detectives? Not only does the criminal get away scott free but the agents cover has been blown.

One Star: The baddie has slipped your dragnet and is free to continue a life of crime.

Two Stars: After a lengthy manhunt the evil-doer has been apprehended.

Three Stars: Wunderbar! The criminal is carted off to the hoosegow and there is much rejoicing by the agent and detectives.

3 Secrets is a fun game if played with the right crowd. It’s certainly not complex by any stretch of the imagination but it can be a bit tricky for those who don’t understand the basic concepts of, say, Twenty Questions. I’ll also mention some of the secrets, and how they correspond to the elements of the cards, can be a bit out of left field; on more than one occasion the detectives in my games were a bit stunned by the reveals and wondered how the hell they were “supposed to guess that?!?!?!” I’ll point out the criminals that you’re trying to apprehend aren’t of the purse snatching/car thieving/chronic jaywalking variety; these are bad folks up to nefarious deeds. Thankfully, you can adjust the amount of time in each round if you find the game either too easy or too difficult.

3 Secrets certainly isn’t ground breaking nor is it a game that’s going to jump immediately into my mind when I have a bunch of people over who want to all play together in a single game. The title is also a one and done; once you’ve played through each of the case cards there isn’t much replay value within the same gaming group. Still, there’s a good amount of gameplay with the fifty cards since the vast majority of players out there aren’t going to sit down for an hours long session of 3 Secrets.

I enjoyed playing 3 Secrets and the design pulls off what it sets out to achieve. Also I can’t stress enough the importance of downloading the app because time keeping without it will be a grind. I’ll admit 3 Secrets might not see a ton of time at the table in my gaming gang but it is fun. Honestly, most of the time you can’t ask for much more than that in a small footprint game.

Anno 1800: The Board Game | Unboxing and First Look

Sigil & Shadow | Review and Page Through