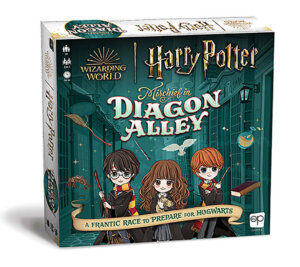 You are a freshly accepted student to Hogwarts School of Witchcraft and Wizardry, eagerly rushing to Diagon Alley to get your first year of school supplies. But a mysterious hex has mixed up all the shoppes, scattering brooms, wands, and other magical items everywhere but in the right place!

Quickly gain control over the Mischief in Diagon Alley by rolling dice and tossing the supplies that don’t belong while grabbing those that do! Be the fastest to restore order amid the magical mayhem and win!