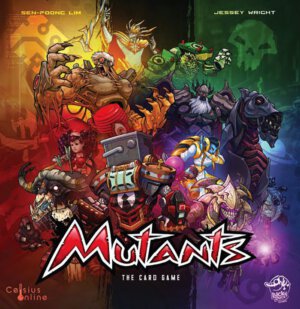 Lucky Duck Games has a busy Q4 planned and one of their games on the horizon (based on the video game from Celsius Online) is Mutants. In the game, players will aim to breed the most talented fighters as the mutants battle it out in the arena to gain prestige. Mutants if for two to four players, ages 10+, plays in around 45-60 minutes, and will carry an MSRP of $40.00 when it arrives in November.

In Mutants, 2-4 players have to mix and match genetics to create the ultimate warriors and demonstrate their prowess in the arena. By dominating in the arena and freezing the most valuable mutants, you gain prestige — and whoever collects the most prestige wins.

In each round, players take turns until all players have used every card in their hand. At the end of the round, the player whose token is closest to the top space of the arena track scores prestige based on the round track. The game proceeds in this way for five rounds, after which players reveal their archives and gain additional prestige based on the freeze value of the mutants they have placed there.

In more detail, on your turn you perform three steps. First, you check to see whether you crushed the competition, then you ready your mutants in play, then you take one action from the following three: