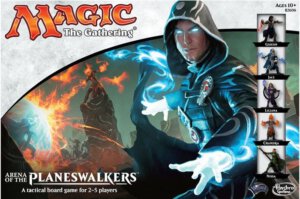 Wizards of the Coast has released more information regarding the upcoming tactical board game set in the realm of Magic: The Gathering. Arena of the Planeswalkers will pit two to five players in battle where M:TG cards aren’t utilized but core card abilities like First Strike, Flying, Deathtouch, and others will. Each player will control their planeswalker as well as cast spells and summon creatures as they try to outduel their opponents. The five planeswalkers included will be Chandra Nalaar, Jace Beleren, Nissa Revane, Liliana Vess, and Gideon to be represented by prepainted miniatures. Gameplay should run between 25 and 45 minutes based on the number of players.

Included in the box will be six modular board pieces, four plastic terrain pieces, three plastic glyphs, two temple ruins, five painted Planeswalker mini figures, 30 squad mini figures, one 20-sided die, eight combat dice, 30 damage counters, 60 spell cards, 10 Squad stat cards, and five Planeswalker cards. Indications are Arena of the Planeswalkers will begin shipping to retailers in June, while becoming available in greater numbers in August, carrying an MSRP around $30. Surely this will be a title to keep an eye out for at this year’s Gen Con!

This sounds really interesting! I like the idea of using the old mechanics (like First Strike etc) in a new way.