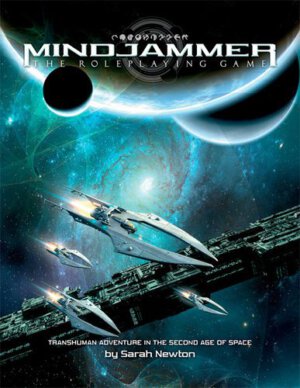 A new science fiction roleplaying game is on the horizon from Mindjammer Press and Modiphius Entertainment. In Mindjammer – The Roleplaying Game players take to the stars in action packed adventure grounded in hard science. The whopping 496 page hardcover core book is available for preorder right now for $54.99.

Grab your blaster, thoughtcast your orders to the starship sentience, and fire up the planing engines – come and defend the light of humanity’s greatest civilization as it spreads to the stars!

Mindjammer – The Roleplaying Game is a 496-page hardback with gorgeous artwork and astrography by industry stalwarts such as Jason Juta, Eric Lofgren, Andreas Schroth, and Ian Stead. It’s a standalone game with everything you need to play, including innovative new rules for alien life, planets, and star systems, organisations, culture conflict, hypertech, starmaps, background material, virtual realities and techno-psionic powers, and much more.

It’s the Second Age of Space – the transhuman adventure is just beginning!

“We’re really excited to be releasing Mindjammer – The Roleplaying Game,” said Sarah Newton, co-owner of Mindjammer Press and author of the game. “Chris Birch (Modiphius) and I have worked together on many titles, including the ENnie-award winning Achtung! Cthulhu and first edition Mindjammer, and the ENnie-nominated Legends of Anglerre. It’s great to be teaming up now to bring Mindjammer – The Roleplaying Game and its line of supplements and fiction to a wide and discerning audience, using Modiphius’s proven industry expertise and excellent track record. We’re looking forward to a regular release of Mindjammer products with Modiphius, beginning with the core rulebook this May.”

“Mindjammer was first introduced as an incredible supplement for the enormous Starblazer Adventures RPG and it’s fantastic that Sarah has now developed the universe into such an incredible setting and brought it bang up to date with the Fate Core ruleset. I know Fate and sci-fi fans are going to find one of the best and most comprehensive roleplaying games at their fingertips.” said Chris Birch.