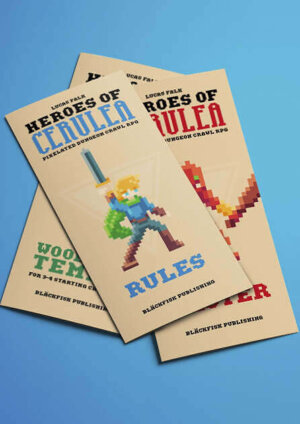 The world is locked in a perpetual cycle of conflict between good and evil—the Guardian and the Paragon bravely defend the world against the Shadow King and his army of monsters. All three have been reborn numerous times throughout history.

Now, the Shadow King has returned once more. But the Guardian and the Paragon are still nowhere to be seen… New heroes must come to Cerulea’s aid!
Heroes of Cerulea is an adventure tabletop role-playing game with lo-fi art and rules, and high playability. It’s heavily inspired by the classic Legend of Zelda games, and by old-school role-playing.

In this game, a key works in pretty much every lock but disappears when it’s used. Characters heal through eating food, and increase their maximum health through finding Heart Containers. For some reason, random pots contain money, arrows, and bombs—and boomerangs can bring those items to you. Monsters are evil; NPCs are focused on one single thing. Dungeons are designed for heroes to solve them.

Suspend your disbelief, and have fun playing. 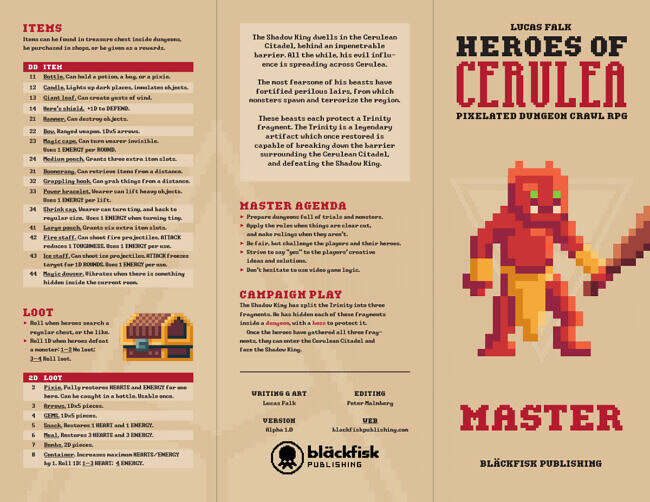 Only players make action rolls. Based on your character’s action, pick the most appropriate of attribute, and roll as many D4 as your value in that attribute. The highest individual die result counts:

Bosses are like monsters, except tougher and more dangerous. They also have particular action movesets, special abilities, and certain weaknesses—for more memorable and dynamic confrontations.

The game comes with a ready-to-play dungeon: Woodland Temple.

Restless spirits are haunting the Gloomwood, and skeletal monsters have started to terrorize nearby farms. It’s said that there is an ancient temple somewhere deep within the woods. Can the heroes break the curse and lay the spirits to rest once more?

The Master pamphlet also includes tools for creating your own dungeons.