Hachette Boardgames has released a new mystery game set in the 1920s, Suspects. The game features three mysteries for players to cooperatively solve. Suspects is for one to six players, ages 10+, plays in around 90 minutes, and carries an MSRP of $29.99 exclusively at amazon.com.

Suspects is a range of investigation games with streamlined rules and plots centered on the psychology of the characters in the style of Agatha Christie’s novels. The first opus will feature the ingenious and fearless Claire Harper in three stories that pay tribute to the great classics of detective literature!

Claire Harper was one of the first women to graduate from Oxford in 1927. Specializing in criminal law, she is also an adventurous traveler. Every mystery is an opportunity for her to test her formidable spirit of deduction and her unfailing determination! In this first episode, follow her in her investigations that will take her from grand manor houses to shady theaters and from Scotland to…Egypt!

Jeff McAleer
Founder/Editor-in-chief of The Gaming Gang website and host of The Gaming Gang Dispatch and other TGG media, Jeff tackles any and all sorts of games but has a special fondness for strategy, conflict sims, and roleplaying games. Plus, he's certainly never at a loss for an opinion...
Latest posts by Jeff McAleer (see all)
Tags: Hachette Boardgames, Suspects 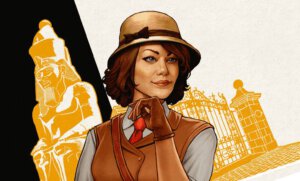