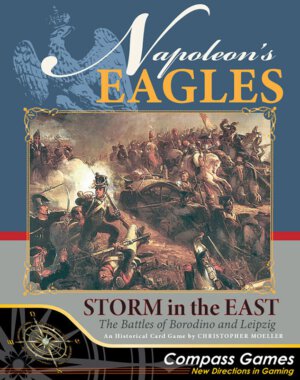 Compass Games is aiming to bring the out of print card game Napoleon’s Eagles back to wargamers everywhere. With Napoleon’s Eagles: Storm in the East, you’ll even be able to complete an entire large scale battle on your tabletop – Borodino and Leipzig are included – in a single evening too. The game is for two players and plays in around 30 to 90 minutes per battle and around four hours for the full campaign. Currently the Kickstarter project is nearing 200% funding and you can reserve a copy of the game and stretch goals for a $42.00 pledge.

Napoleon’s Eagles: Storm in the East is a card driven game designed to play through two famous battles of the late Napoleonic era: Borodino (September 5-7, 1812) and Leipzig (October 14-18, 1813).

The intent of Napoleon’s Eagles is to present a Napoleonic battle game in which the largest of period battles can be played to completion in an evening.

While there are multiple scenarios presented in the game, each with its own special rules and conditions for victory, most battles are won by inflicting nine demoralizations on your opponent’s army, before he does the same to you. Combat is a back and forth affair, using specially designed decks of playing cards. Combat is simple, fast and straightforward, but has a number of subtle wrinkles that you’ll discover during play. Units represent infantry and cavalry corps, massed artillery formations, and those leaders operating at the highest levels.