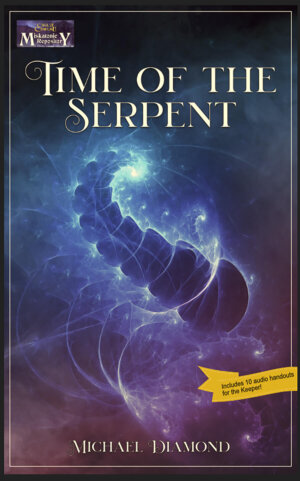 A new Call of Cthulhu adventure has arrived from the Chaosium Inc Miskatonic Repository. Time of the Serpent takes the investigators to 1920s Chicago as they’re drawn into a double murder with far more mystery than meets the eye. The 65 page PDF is available at DriveThruRPG for $8.00.

Time of the Serpent is set in the urban depths of 1920s Chicago. The investigators are quickly caught up in a grisly double murder at a local speakeasy called, The Kiss.

With little time to act, the investigators must dive into the dark and blood-filled world of Chicago’s meat packing industry to determine who killed the two men and why. As the mud and muck grows, the investigators slowly sink deeper into the mystery about the murdered men’s employer and the chilling truth about what slithers at night in the Chicago Union Stockyards.

Time of the Serpent is a 65 page scenario, with original art, printable player handouts, 10 audio handouts for the Keeper, and a new mythos creature.