New Edition of ‘Masks of Nyarlathotep’ is on the Near Horizon

The original Masks of Nyarlathotep is rightfully considered a classic roleplaying campaign – regardless of genre or system – and a new edition is nearing release from Chaosium. I personally ran MoN when it came out for Call of Cthulhu in the 80’s and it certainly was a horror filled thrill ride for Elliott Miller, Paul Miller, and Ed Rupprecht around my gaming table. A completely updated Masks of Nyarlathotep campaign will be released as a slipcase containing two books later this year, according to Chaosium, but it sounds as if the PDF edition may only be a couple of months away!

Mike: “Work on the new edition of Masks of Nyarlathotep is in full swing. Layout of the various chapters is in mid process, combining the remastered text with new art pieces, maps, handouts, and style formatting. Nick Nacario is bringing these materials together to form what will be two hardback books, forming the Masks of Nyarlathotep slipcase set. Both books feature new cover art by Sam Lamont and Rhys Pugh.”

This edition of Masks of Nyarlathotep is an updating of the multi-part epic campaign, set in 1925, in which steadfast investigators unravel secrets and battle the minions of darkness in an attempt to stop world-shattering events from destroying humanity.

The original six-chapter campaign – featuring adventures in America, England, Egypt, Kenya, Australia, and China – has been developed and updated by Mike Mason, Lynne Hardy, Paul Fricker, and Scott Dorward. The revision features enhanced encounters and tightens up the plot and clue trails, and is supported by extensive Keeper guidance and advice for running the campaign with either Call of Cthulhu or Pulp Cthulhu.

Mike: “We are introducing a brand new chapter. Set in Peru, this new scenario provides a introductory prologue to the campaign, where the investigators get to meet Jackson Elias, the industrious and charming author, whose research leads into the globe-spanning mystery. Having seen the first four chapters laid out, the imagery and material really jump off the page. Nick is doing a grand job bringing the campaign to life in the layout, which looks fabulous. The new maps and handouts designed by ENnie Award winning Andrew Law are something to see, while the new artwork is out of this world.”

Nick Nacario makes layout sing in Chaosium’s Call of Cthulhu line, and this two-book descent into madness is no different.
Nick: “Layout for Masks of Nyarlathotep is well underway! I am working through the England chapter, and I aim to have a finished PDF ready in a few weeks time.”

The two-volume edition of Masks of Nyarlathotep will come in a slipcase set and include a special pack of ready to use full color handouts. Supporting this will be an additional PDF pack of additional player and Keeper aids, as well as a set a of ten pre-generated investigators.

Masks of Nyarlathotep will initially be released in PDF, with the physical slipcase edition available later in 2018. Purchasers of the PDF version from Chaosium.com will receive a special discount coupon, deducting the full price of the PDF off the cost of the physical version.

Jeff McAleer
Founder/Editor-in-chief of The Gaming Gang website and host of The Gaming Gang Dispatch and other TGG media, Jeff tackles any and all sorts of games but has a special fondness for strategy, conflict sims, and roleplaying games. Plus, he's certainly never at a loss for an opinion...
Latest posts by Jeff McAleer (see all)
Tags: Call of Cthulhu, Chaosium Publishing, Masks of Nyarlathotep, RPGs 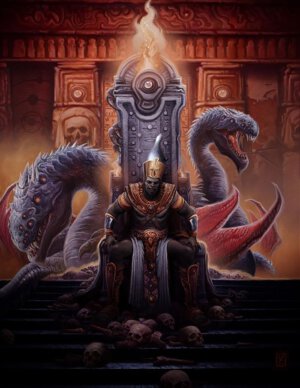 New Edition of ‘Masks of Nyarlathotep’ is on the Near Horizon

A completely updated Masks of Nyarlathotep campaign will be released as a slipcase containing two books later this year and it sounds as if the PDF edition may only be a couple of months away!
0
Awful