New Edition of ‘The One Ring: The Lord of the Rings Roleplaying Game’ Arrives This November 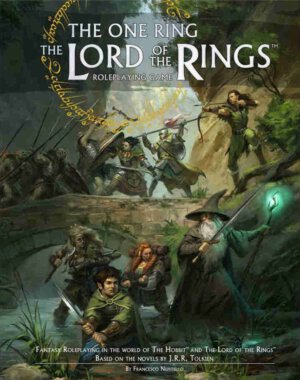 This Fall brings the release of the highly anticipated second edition of The One Ring: The Lord of the Rings Roleplaying Game from Cubicle 7 Entertainment. The new edition not only introduces streamlined gameplay and rules tweaks but also advances the timeline nearer the War of the Ring. The 352 page corebook will arrive in November carrying an MSRP of $59.99.

This release advances the storyline into the Twilight of the Third Age and closer to the events of the War of the Ring. It has been almost twenty-five years since the defeat of Smaug the Terrible, and the hope that came with the death of the Dragon has dwindled. A Shadow grows in the East, and the Dark Lord’s forces are mustering their strength. The Steward of Gondor has need of heroes, and great deeds await those who would answer the call.

The second edition is a 352-page game that will feature all new art as well as stunning new maps created by renowned cartographer Jared Blando. Players can choose from eleven Cultures and six Callings from across Middle-earth to create their Company, and their journeys will see them play a crucial role in the events leading up to The War of the Ring. This edition also features a set of updated and streamlined rules, developed from years of players’ feedback and design development, and implemented by renowned designer Francesco Nepitello.

Longtime players will rejoice when they learn that all previously released material for The One Ring will be usable with the second edition, with only minor adjustments.

Tags: Cubicle 7 Entertainment, RPGs, The One Ring The Lord of the Rings Roleplaying Game