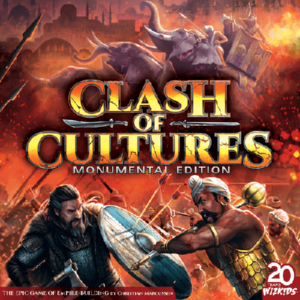 If you’re a fan of civilization building games then you’ll want to keep your eyes open for a release from WizKids slated for late this year. Clash of Cultures: Monumental Edition will include a revamp of the classic 4X game, two previously released expansions (both Civilizations and Aztecs), and resculpted pieces. The game will include over 300 sculpted buildings, units, ships, and seven unique Wonders. Clash of Cultures: Monumental Edition is for two to four players, ages 14+, plays in around two hours, and will carry an MSRP of $139.95 when ti arrives in November.

Clash of Cultures: Monumental Edition brings back the classic game of exploration, expansion, and development with the Clash of Cultures base game and the Civilizations and Aztecs expansion in one box! Grow your civilization, advance your culture and tech, and leave your mark by building wonders, with this edition of the game including fully-sculpted miniatures of the Seven Wonders.

In Clash of Cultures, each player leads a civilization from a single settlement to a mighty empire. Players must explore their surroundings, build large cities, research advances and conquer those who stand in the way. The game features a modular board for players to explore, 48 distinct advances, seven mighty wonders, and loads of miniatures and cards. The winner will create a culture that will be remembered and admired for millennia.