This morning Osprey Games revealed the latest entry in the Undaunted wargame line. Coming this Fall is Undaunted: Stalingrad where the WWII action moves to the Eastern Front in a massive new standalone game. The game is for two players, ages 14+, and plays in around 30 to 60 minutes per scenario. No MSRP information has been released yet.

The time has come. We’re proud to announce that in Fall 2022, Osprey Games will publish Undaunted: Stalingrad from the award-winning David Thompson and Trevor Benjamin. With a thrilling campaign of branching narratives, our latest game in the Undaunted series will contain more content than ever before. This standalone, big box experience will challenge players with an immersive new narrative experience.

Game designers David Thompson & Trevor Benjamin said, “We’re very excited about the release of Undaunted: Stalingrad. We’re digging deep into the storied Battle of Stalingrad, a key battle not only for the Eastern Front but the entire Second World War, and we’re doing it with a massive box full of content unlike anything Undaunted fans have seen before. We’re introducing new units, actions, and ways to interact with the environment. What we’re most excited about though, is that we’ve created an integrated campaign, where the results of each scenario impact the rest of the campaign’s rich narrative and will set the stage for scenarios to come.”

Stalingrad, 1942. Before you awaits a gruelling conflict in this keystone battleground. As the bullets and bombs tear the city asunder, only through wits and valour can you seize the cornerstone of the entire Eastern Front and change the course of history.

A heavy burden rests on your shoulders. Every casualty suffered in battle will weaken your forces for the entire campaign. Every bomb blast and mortar shell leaves the very ground for which you are fighting in further ruin. Every inch lost to the enemy brings you closer to the jaws of defeat. Over the course of up to fifteen branching scenarios, you will decide the fate of Stalingrad and, perhaps, the war itself. Even though the consequences of your actions will persist, the game itself can be fully reset and replayed, allowing you to explore every potential outcome.

Undaunted: Stalingrad is a monumental standalone game that expands the series’ scope and challenge beyond anything that’s come before. Through its branching campaign, you’ll discover more of the hundreds of cards and tiles every time you play. Featuring more than 430 unique illustrations by Roland MacDonald and 150 evocative mission briefings written by acclaimed author Robbie MacNiven, immerse yourself in this campaign at the heart of the war.

Jeff McAleer
Founder/Editor-in-chief of The Gaming Gang website and host of The Gaming Gang Dispatch and other TGG media, Jeff tackles any and all sorts of games but has a special fondness for strategy, conflict sims, and roleplaying games. Plus, he's certainly never at a loss for an opinion...
Latest posts by Jeff McAleer (see all)
Tags: David Thompson, Osprey Games, Trevor Benjamin, Undaunted Stalingrad 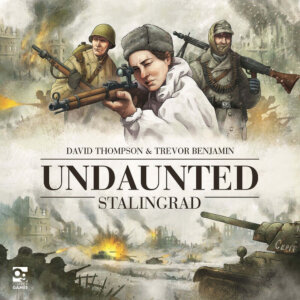 Coming this Fall is Undaunted: Stalingrad where the WWII wargaming action moves to the Eastern Front in a massive new standalone game.
0
Awful