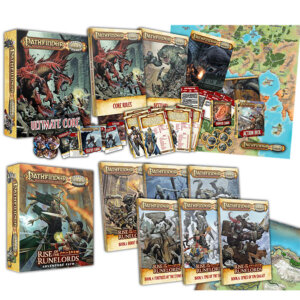 Pinnacle Entertainment Group and Paizo Inc are teaming to bring Pathfinder to the Savage Worlds roleplaying game by way of Kickstarter. A core rule set is on offer and the first major adventure path heading to SWADE will be the classic Rise of the Runelords. The project hit its funding goal in less than two minutes. There are a variety of pledge levels for both physical and digital releases with an Ultimate Core box set available for a $200.00 pledge and the Rise of the Runelords box set for a $100.00 pledge through February 15th. The digital releases are expected in April with the print products to follow in September.

Pinnacle Entertainment Group loves Pathfinder and Paizo’s legendary Adventure Paths. We know you do, too, because we’ve seen literally hundreds of fan-made conversions of their amazing adventures over the years. So we decided to make it official and Paizo was gracious enough to let us play in their sandbox.

That means we’re making Pathfinder for Savage Worlds AND an official version of the Rise of the Runelords Adventure Path!

Those who love the Savage Worlds game system can now play some of the best-selling, most-played, fan-favorite epic fantasy adventure tales in the entire history of the roleplaying game industry! 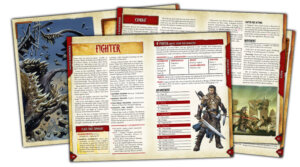 If you’re new to Savage Worlds, it’s a flexible system that can transition from NARRATIVE “theatre of the mind” to detailed tactical combat with CRUNCH as you like!

It powers everything from our own best-selling, award-winning Weird Western, Deadlands to our our many other settings such as Rippers, The Last Parsec, Eric Powell’s The Goon, or the Savage World of Flash Gordon. You might also know we made the smash-hit Rifts for Savage Worlds with Palladium Books. Supers, horror, Western, scifi, and now high-fantasy—it’s all one Fast! Furious! Fun! system.

We’re also super excited to bring you the Savage Worlds version of Paizo’s first “Adventure Path,” Rise of the Runelords. This epic, six-book saga takes Pathfinders on an incredible journey filled with deadly cultists, terrifying ogres, rampaging stone giants, and a final confrontation with…well, we don’t want to ruin the surprise, but there’s a big hint in the title! 😉

We love Paizo’s ethos, world-building, dedication to story, and incredibly detailed Adventure Paths, and can’t wait to take this journey into the Savage World of Golarion with you.