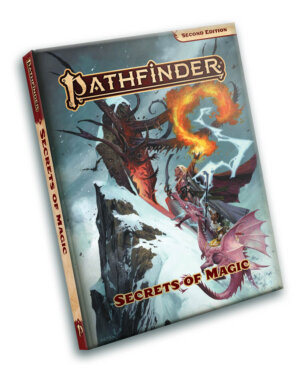 Following a very successful public playtest, two new Pathfinder magic character classes will arrive this summer from Paizo Inc. Not only will Secrets of Magic introduce both the Magus and the Summoner classes but will also contain hundreds of new spells for casters of all stripes. The 256 page hardcover will carry an MSRP of $49.99 when it arrives in August. The tome will also be available in PDF on release as well as a pocket edition at some point.

Discover the untold potential of magic! Secrets of Magic, the newest hardcover rulebook for the Pathfinder Roleplaying Game! Secrets of Magic brings the popular magus and summoner classes into Pathfinder Second Edition, unlocking heroes who combine magical might with martial prowess and offering command of a powerful magical companion creature. The lavishly illustrated, 256-page rulebook contains hundreds of new spells with potent offerings for all spellcasting character classes, magic items for any player character, and lore detailing the fundamental structure and theories of magic. A special section within the volume—the Book of Unlimited Magic—presents new methods of spellcasting, with elementalism, geomancy, shadow magic, rune magic, and even pervasive magic to give every place and creature in your game a magical spin!