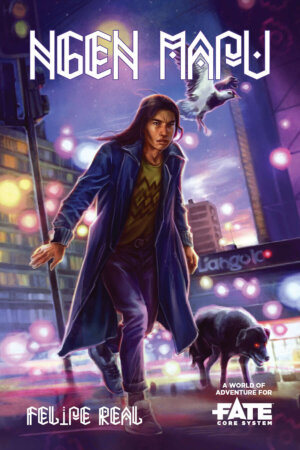 Evil Hat Productions has released their latest World of Adventure for the Fate roleplaying game and I have to say this strikes me as an unusual release. Ngen Mapu is a setting where the player characters can be nearly anything imaginable as they strive to protect the Land  from the corruption of civilization. The 43 page PDF is available at DriveThruRPG as a pay what you want, with a suggested price of $4.00.

The Land is sick, and humans are the cause.

Not all of them, of course, and therein lies the problem. Civilization—that brash, incomprehensible, recent invention of humanity—tends to corrupt what it does not understand. And people really don’t truly understand the Land (or mapu)… not any more.

As ngen—mighty, immortal, shapeshifting, and largely pacifistic beings from beyond the dawn of time—you each act as guardian of some aspect of the Land, be it water, laughter, lightning, dreams, or some other essential concept of existence. It’s your job to undo the harm done to the Land and thereby move the world towards a better form.

But how can you guard the Land against something you barely understand yourself, when the path of violence risks turning you toward corruption and becoming a wekufe, a creature of darkness and destruction? Find out in Ngen Mapu, a new Fate World of Adventure of South American urban fantasy from Felipe Real.

Inside this 43-page supplement you’ll find:

Take the form of an animal, a stream, a leaf, a person, an idea. Restore the Land as one of the ngen.