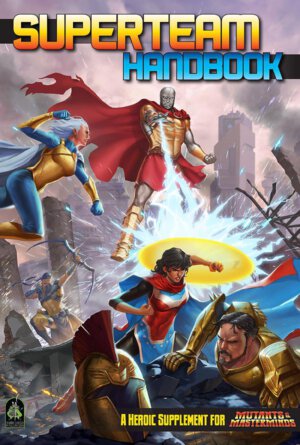 The latest supplement for the hit super heroic roleplaying game Mutants & Masterminds is available for preorder from Green Ronin Publishing. The Superteam Handbook allows players and GMs to focus on creating their own legions and leagues of super powered characters while also providing eight premade teams to include in your campaigns. You can score the 160 page full color hardcover for $34.95.

No hero can stand up to every challenge alone—nor should they! Legendary heroics demand teamwork, and teamwork demands a team. Are you a super-powered minority fighting to protect a world that fears you? A family of gene-freaks trying to scrape by? Or super-powered ex-cons trying to do right? Whatever brings you together, your teammates are your friends, rivals, co-workers, and family all in one—with all the love and hate that implies. But together you can achieve incredible things none of you could alone. Whether a ragtag band of vigilantes falls in together by accident or Earth’s greatest protectors train to work as a single unit, heroes are always more than the sum of their parts!

The Superteam Handbook sourcebook for Mutants & Masterminds puts the focus on the heroes and their team, with details for players and gamemasters alike to make their team cohesive, dramatic, and fun! Understand what it means to be a team and form a common identity and responsibility, and when to buck the system and rebel. Learn the ins and outs of not just cooperation. Heroes can work closer together than ever before with new, team-focused powers, advantages, and attack options.

In addition to new game material, the Superteam Handbook presents eight pre-made hero teams—ranging from PL 5 to PL 12—to serve as campaign-kickstarters, with guidelines, resources, and advice for running a variety of heroic campaigns, along with background and statblocks for their members to use as player characters, rivals, or villains. Will you save the planet as part of the globe-hopping UNIQUE, battle to keep the urban jungle safe as one of the street-brawling Ferroburg Four, or take on ancient aliens from the cockpit of your giant robot as a member of MagnaForce? Whatever you choose, your friends stand by your side!