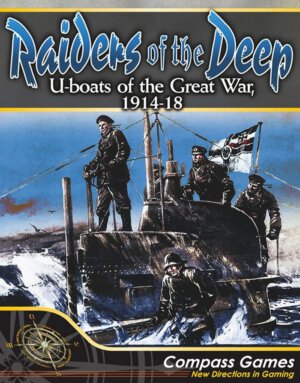 The latest release in the Hunters submarine warfare series is about to get underway from Compass Games. Raiders of the Deep: U-boats of the Great War, 1914-18 provides plenty of historical solitaire action as the player leads their German U-boat and her crew on patrols to sink Allied vessels. The game is shipping on March 15 so you can still get your order in to score the game during its first wave (no pun intended). Raiders of the Deep takes about two to three hours to play and carries an MSRP of $99.00 but you can snag it for $75.00 right now.

Raiders of the Deep: U-boats of the Great War, 1914-18 is a solitaire, tactical level game placing you in command of a German U-boat during WWI (known at the time as The Great War). Your mission is to destroy as much Allied shipping as possible, while advancing your crew quality, increasing your Commander rank, and attempting to survive until the Armistice and the end of the war. Raiders of the Deep is based on the popular Hunters game system by Gregory M. Smith and marks the first dedicated boardgame treatment covering WWI U-Boat warfare. 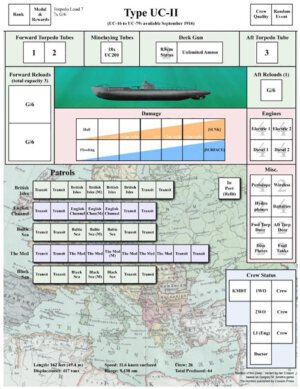 The story of the first U-boat war is one of the desperate battles above and below the waves, of piracy and atrocities, and of the frustrations caused by the maneuverings of politicians and military leaders who failed to understand the realities of this new kind of warfare. Raiders of the Deep offers players an opportunity to experience the story of that first U-boat campaign. It was a campaign that combined savagery and chivalry in equal measure, reflecting the twilight of the old system of warfare and the dawn of the modern age: an age of Total War.

The object of the game is to conduct numerous patrols in the role of a German U-boat Commander and sink enemy ships. You command one of 19 available German U-boat models which undertook missions. The success of each patrol is reflected by the total tonnage of ships sunk, which will result in promotion and crew advancement, and in receipt of the highly coveted Pour le Mérite award. Just as in the real U-boat war, the game system involves a great deal of chance (as was the case historically), but ultimate success rests on the decisions, you make during your career.