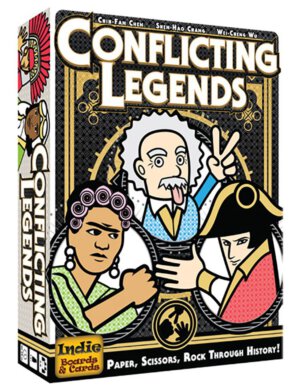 Indie Boards and Cards is going to rerelease the Japanese card game of global conquest, Conflicting Legends, this May. In the game players will use famous personages from history to create a civilization and conquer regions. Battles are quickly resolved through rock-paper-scissors. Conflicting Legends is for three to six players, ages 14+, plays in around 30-45 minutes, and will carry an MSRP of $19.99 when it arrives May 15.

Conflicting Legends is an epic war of Rock-Paper-Scissors in which the fate of the world lies in your hands. You will develop civilizations and conquer lands with all of the great people in history at your disposal. Will your name go down in history as a famous emperor or as a subjugated loser? It’s all determined by Rock-Paper-Scissors!

In Conflicting Legends, players may conquer new lands with their forces or develop the lands with culture or technology to gain glory points. Whoever conquers all six continents or wins ten or more glory points will be declared the winner. The key to victory is to attack opponents’ lands and resolve the conflict by casting Rock-Paper-Scissors. With the special abilities of various great people in the history, RPS has never been so much fun!

Conflicting Legends is a fast-paced, highly interactive, and uniquely strategic card game fought by history’s greatest personalities. Play science and culture persona cards to build your empire, or military persona cards to conquer new territories, and challenge your opponents. Each card has a unique ability. You’ll need to time your attacks to have the best chance of winning. You’ve never had so much fun playing rock-paper-scissors!

Digital Edition of ‘Aeon’s End’ is Now Available for Android, iOS, and PC