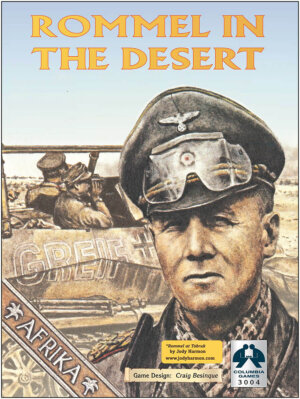 Columbia Games is in the midst of a Kickstarter to bring about the return of the classic wargame Rommel in the Desert. This new enhanced edition will feature a larger and mounted map. The game game is for two players, ages 12+, and plays in around two and a half hours. The Kickstarter project is over 500% funded and you can reserve a copy of the enhanced edition of Rommel in the Desert for a $79.00 pledge through February 5. Expected delivery is this May.

Rommel in the Desert is a fast-moving, challenging, tense, and playable wargame based on the North Africa desert campaign of World War II.

This game has been enjoyed by thousands of gamers for over 20 years. Experience the wargame many consider the best on the subject.

Rommel in the Desert simulates the experience of command. The real problems of generals have nothing to do with shuffling combat factors to get a perfect 3-1 attack while the enemy waits passively to be overwhelmed. Rommel gained many of his victories by employing speed, daring, and surprise.

In this game, as in the desert campaign, the events of the battlefield are often subordinate to the battle of wits and nerves between opposing commanders. A good grasp of strategy will help, but foresight, nerve, and instinct are the crucial elements of success.