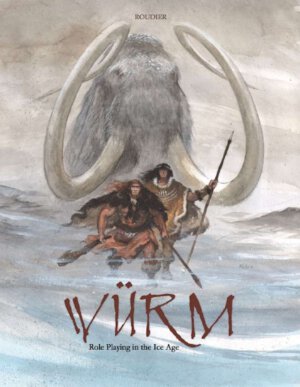 Right now you can save 60% off the roleplaying game Würm from Nocturnal Media and Chaosium Inc. Würm is a rules light system aimed at telling stories of the prehistoric world. Score these savings on both physical books and PDFs.

Würm is a system-lite RPG set in the last period of the Ice Age 35,000 years ago. Characters don’t have Attributes or even Skills, but they are instead described by Strengths like Secret of the Bear or Eye of the Panther and Weaknesses such as Fearful or One-Eyed. The nature of the game is at your discretion — you may play a game that’s more historically accurate or you may decide to incorporate fantastical elements like magic and the spirit world that are discussed in the rules.

Originally published in France, Würm has been professionally translated. Nocturnal Media and Chaosium are proud to present this acclaimed RPG to an English-speaking game audience.

In Würm you will find adventure in the prehistoric past of our own world. In this long-forgotten time, many powerful creatures roamed a vast territory covered in steppes and taiga, reaching from the white mountains to the raging sea: mammoths, aurochs, bison, giant deer, cave bears and cave lions. Among these huge creatures, two species of humans live in small communities of hunter-gatherers: the robust Bear Men (Neanderthals) and the taller Long Men (Cro-Magnon, or Cavemen).

When you play Würm, it will be up to you to imagine what life was like for our ancestors, and explore your own vision of this time. During your adventures, whether simply surviving or going on perilous hunts or legendary quests, your characters will gain strength, wisdom and prestige by exploring unknown territories, daring to enter the darkness of mysterious caves, seeking out the powers of ancient spirits, or challenging the creatures of the night.

Pay What You Want for Call of Cthulhu: Does Love Forgive? and Support the People of Ukraine

Red Flag Over Paris Reviewed on The Gaming Gang Dispatch #760