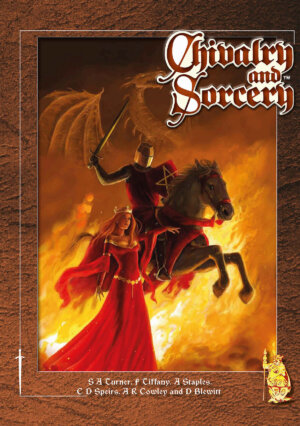 A new Bundle of Holding has arrived and it features the 5th edition of the medieval fantasy Chivalry & Sorcery from Brittannia Game Designs. You can jump aboard starting at $9.95 to grab the 600+ page corebook and more! These savings run through April 26th and twenty percent of your payment (after gateway fees) will be donated to the charity designated by Stephen Turner of Brittannia Game Designs, The Honeypot Children’s Charity.

Adventurer! This all-new Chivalry and Sorcery Bundle presents the venerable Chivalry and Sorcery tabletop roleplaying game of medieval fantasy adventure in its new Fifth Edition from Brittannia Game Designs. Long respected for historical accuracy — even in its depiction of arcane magick — C&S authentically conjures the glories of Europe’s Middle Ages: courtly grandeur, tournaments and jousts, fantastic beasts of myth and folklore, and diverse visitors and cultural influences from faraway lands. The 2020 Fifth Edition, funded in a July 2019 Kickstarter campaign, refines and streamlines the rules to embody a complete experience of every major period of the Middle Ages.

For just US$9.95 you get all seven titles in our Player Collection (retail value $49) as DRM-free .PDF ebooks, including the complete 602-page Chivalry and Sorcery 5E core rulebook; four Companion character supplements originally published for older editions (Dwarves, Elves, Armourers, and Knights); and The Art of Chivalry and Sorcery.

And if you pay more than the threshold price of $25.08, you’ll level up and also get our entire Gamemaster Collection with nine more supplements and scenarios worth an additional $71.50, including the Nightwalkers rules expansion (adding vampires and lycanthrope characters); location sourcebooks andmaps for Anderia and the Dragon Reaches of Marakush; three full-length adventures (Treachery, Treason, and Creag Hill) and the C&S Gamemaster Screen.