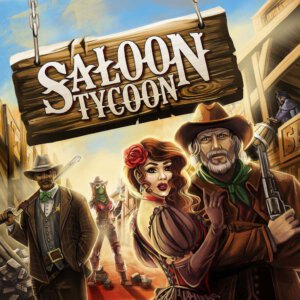 The popular western game Saloon Tycoon has received a second edition from Van Ryder Games. In the game players will look to build the best saloon in an Old West town. Saloon Tycoon is for two to four players, ages 10+, plays in 20 to 40 minutes, and carries an MSRP of $59.99.

Yee haw! Welcome to the Old West! Yer the new and lucky owner of a Saloon lot smack dab in the middle of town. But ya ain’t the only one! Outwit your opponents to become the most popular Saloon owner in town by addin’ new features for yer customers and attractin’ influential citizens to visit yer Saloon. But be careful! Don’t let yer Saloon become a place where outlaws loiter!

Players are Saloon owners in an old west gold rush town. They’ve purchased lots on the four corners of the main crossroads and need to expand their small establishments into thriving businesses. Their goal is to create massive centers for commerce and entertainment in the wilds of the West. To boost their success, they’ll need to attract the wealthy and famous citizens of the town while keeping away the less savory characters.

This is a building and tile placement game where the purpose of the game is to build the best saloon. The game is played by each player taking a board and then taking turns going clockwise from the first player earning gold, taking an action, building and collecting bonuses.

The player with the most reputation points at the end of the game wins!