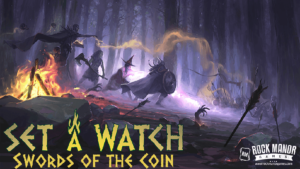 Rock Manor Games has already hit their Kickstarter funding goal for the fantasy battle game Set a Watch: Swords of the Coin. This standalone follow up to well received Set a Watch tasks players with cooperating to defeat a variety of dastardly monsters while struggling to keep their campfire burning. Set a Watch is for one to four players, ages 10+, and plays in 60-75 minutes. The project funded in the first 29 minutes and you can reserve a copy of the game, as well as stretch goals, for a $28.00 pledge through October 15th. Expected delivery is September of 2021.

Set a Watch: Swords of the Coin is a 60-90 minute, cooperative adventure puzzle game for 1-4 players. Swords of the Coin is a stand-alone expansion featuring the same critically-acclaimed gameplay along with some new twists centered around collecting coin and buying items from the merchant.  The expansion is fully compatible with the original game; creatures, locations and characters can all be mixed and matched together with the original Set a Watch.

If you’re unfamiliar with the original game, Set a Watch is a cooperative game where you must combat fiendish creatures at nine locations while keeping your campfire burning. Every round you will visit a new location and pick an adventurer to rest and take camp actions. The adventurers on watch attempt to clear a line of creatures with their dice and abilities. The original deluxe game became a reality thanks to over 5,800 backers and features 8 different adventurer classes.

The Kingdom is in grave danger once again, but our mighty adventurers are nowhere to be found. The King has stepped in and offered to pay any mercenary for taking up arms against the darkness. This quest falls on the shoulders of four mercenaries, each with a unique set of skills, to band together to vanquish this evil from the Kingdom.

Set a Watch: Swords of the Coin is both a standalone game for 1-4 players and an expansion that can be combined with the original cooperative game. Featuring all new characters, this bunch of adventurers has to be motivated to work together. Every round you will visit all new locations and pick an adventurer to rest and get paid to take camp actions. You can use this coin to purchase powerful items from the new Merchant board and item deck. These items will assist the rest of the party on watch as they battle a line of all new creatures trying to make their way into camp. It is still a battle to keep the campfire burning! Use your wits and skill to fight for the light…or all will perish in the darkness. 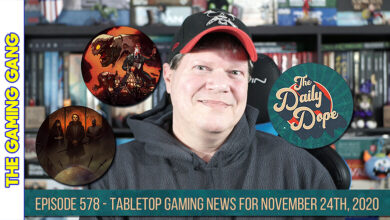 Hunt the Ravager Arrives in Early 2021 from Kolossal Games