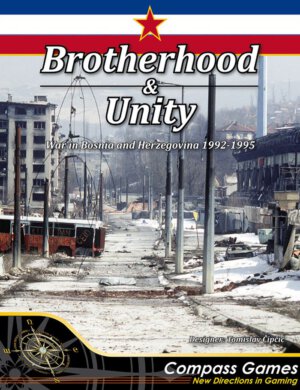 The latest release from Compass Games looks to be an interesting one as it simulates a conflict which isn’t the topic of too many strategy titles. In Brotherhood & Unity, two or three players lead the opposing factions of the Bosnian War of the 1990’s. The game is for ages 14+ and plays in two to four hours. Brotherhood & Unity is currently available for preorder from Compass for $52.00 and will carry an MSRP of $69.00.

Winston Churchill once said – “The Balkans produce more history than they can consume.” And the history of Bosnia and Herzegovina showed just that. The war that erupted in the spring of 1992 brought bitter fighting, indiscriminate shelling of civilians and a wave of atrocities. The war was fought by: three local ethnic groups (Bosniaks, Serbs and Croats), paramilitary formations from Serbia and Krajina, Croatian armed forces, foreign Muslim volunteers, UN peacekeepers, and NATO airforce. Events such as the Siege of Sarajevo and the Srebrenica massacre became iconic of the conflict, as the war became the single most important historical event in Balkans since the WW2. And still – it’s objective history has yet to be written.

Brotherhood & Unity is a 2-3 player card driven wargame which depicts the war in Bosnia and Herzegovina from 1992-1995 (“Bosnian War”). The game shows all of the major events: from the siege of Sarajevo (shown in separate, detailed map), to the ferocious battles for the Posavina corridore, and desperate defence of the Bosniak enclaves. Main features are: Point-To-Point movement system, play driven by Strategy Cards, quick combat resolution (no CRT), streamlined rules and fast gameplay. Interaction between warring sides (Bosniaks, Serbs and Croats) creates an intensive and exciting gameplay experience.