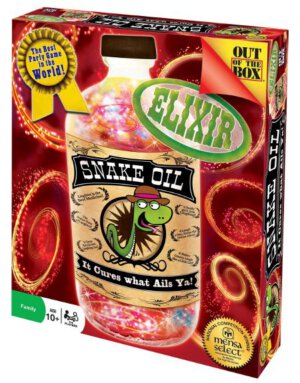 Two new expansions for the party favorite Snake Oil are on the horizon from Out of the Box Publishing. Both Snake Oil: Elixir and Snake Oil: Party Potion are stand alone and won’t require the original game to play, although you can easily incorporate the cards from all three releases together.

Snake Oil: Elixir plays exactly the same as the original version but is gear toward a smaller group of player; two to eight rather than two to ten. Players will continue to insane and inane products in order to earn customer cards from other players. Snake Oil: Elixir doesn’t have a release date as yet but will carry an MSRP of $19.95.

Snake Oil: Party potion is aimed toward a touch younger audience, ages eight and up, as opposed to ten and up as in the other two editions. This edition also shrinks the number of players recommended down to two to six. Snake Oil: Party Potion also doesn’t have a release date but the MSRP will be $11.95.