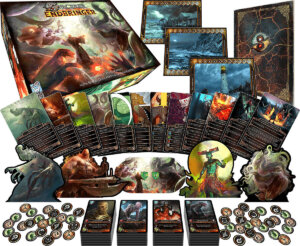 Following a successful Kickstarter, Wise Wizard Games has revealed a new boxed expansion is arriving this Fall for the Sorcerer board game. Sorcerer: Endgame creates a cooperative environment for the players’ magic users as they attempt to take down an evil demigod. The expansion is for one to three players, ages 12+, and will carry an MSRP of $49.95 when it arrives in Q4. You can check out my review of the core game right here.

Sorcerer is a beautifully crafted Victorian-era dark fantasy game where players take on the role of evil sorcerers battling for control of the mortal realm. Create a new sorcerer each game by combining a character, a lineage, and a domain deck.  You’ll summon horrific minions to different battlefields and do battle using custom dice.

In the Endbringer expansion, combined with the Sorcerer base game, one to three players will team up to battle against a crazed demigod known as a Maneater. You’ll create this adversary by combining a Nemesis (who they are) with an Aspect (what army they lead) and a Scenario (what they are doing). For example, you may battle Erling Khan the Deathdealer who is Leading the Invasion.