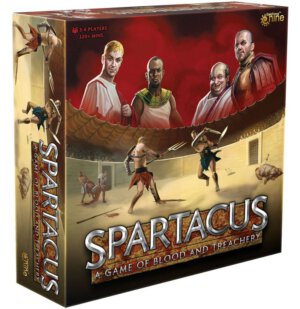 Gale Force Nine has revealed plans to bring the gladiatorial title Spartacus: A Game of Blood and Treachery back to print with new artwork. The game was originally based on the Starz series and was well received (here’s my review!) when it originally hit in 2012. The game places players at the head of rival noble Roman houses scheming against each other as they all bid for more power. The game is for three to four players, ages 17+, plays in around two to three hours, and will carry an MSRP of $50.00 when it arrives in late 2020.

This fast-paced board game set in Ancient Rome is the return of the classic 2012 game with all new artwork. It includes backstabbing schemes, fierce bidding, and bloody gladiatorial combat!

Mastermind schemes and undermine your rivals with cards from your hand. Betrayal and treachery are your weapons of choice. Money greases the wheels of power. Bid against your opponents in the open market, and acquire the best new prospects for the Arena! Pit your champion against your enemy’s, and wager on the results. The path to victory leads across the sacred sands of the Arena!

In Spartacus: A Game of Blood & Treachery—an exciting game of twisted schemes and bloody combats inspired by the hit STARZ Original series—each player takes on the role of Dominus, head of a rising house in the ancient Roman city of Capua. Each house is competing for Influence to gain the favor of Rome. Through a combination of political schemes and glorious battles on the arena sands your house will rise in fame and stature. As Dominus, you have a variety of resources at your disposal. Guards protect you from schemes launched by rivals. Slaves run your household and earn gold. Gladiators compete to bring glory to themselves and influence to their Dominus.